Kate Bouey - Mar 9, 2017 / 12:03 pm | Story: 191132There is a great and growing need in Vernon for people who can't afford the high cost of dental care.The number of people using the non-profit Community Dental Access Centre has doubled since it opened four and a half years ago, said board member Laine Lowe.“We went from (opening) two days to four and a half days per week and there's even greater need,” said Lowe. “We still have a wait list. People have to wait to get their treatment done, so there is a huge need out there.”Dental care at the 31st Avenue clinic is not free except in the most extreme cases.“It's a reduced cost dental clinic. We do have some emergency services if someone is in desperate need and they do not have any finances. We can help them out in an emergency but we do ask them to pay a little bit.”The centre, one of only 20 in the province, focuses on basic dentistry and does not perform any type of cosmetic dental work. It is staffed by dentists who are paid less than in a private practice and those who volunteer for urgent care cases.As well, retired
Read more THURSDAY, Feb. 23, 2017 -- Adults with gum disease may be twice as likely as people with healthy gums to suffer a stroke, new research suggests.It's not the first study to link gum disease and brain attacks caused by blood clots.However, the new findings expand on that knowledge by demonstrating a "dose-response" relationship."The higher the level of gum disease, the worse the risk," explained study author Dr. Souvik Sen, chair of neurology at the University of South Carolina School of Medicine, in Columbia.Stroke risk rose with the level of gum disease; it was 1.9 times, 2.1 times and 2.2 times higher for people with mild, moderate and severe gum disease, respectively, the findings showed.One stroke expert said that was the most intriguing discovery in the study."The fact that it is a dose-effect relationship, it's an important finding," said Dr. Maurizio Trevisan. He is dean of the City University of New York School of Medicine in New York City."Unfortunately, it still does not prove the cause/effect relationship because it's an observational study," said Trevisan. However, he was involved in the first major study, published in 2000, showing a relationship between poor oral health and stroke 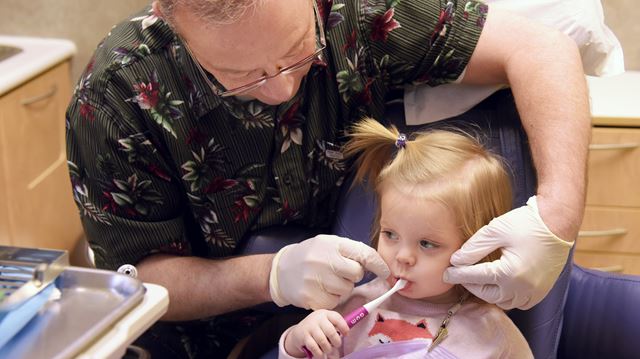 Dental coverage for kidsStaff/MetrolandA dentist teaches a young patient how to brush her teeth, during her first visit to the office. Some children are eligible for dental coverage through Healthy Smiles Ontario.SIDEBARHow to access Health Smiles Ontario for your kids:• Applications are available at a local health unit or ServiceOntario location, online at ontario.ca/healthysmiles, and by mail.• Children are automatically enrolled if they receive Temporary Care Assistance or Assistance for Children with Severe Disabilities, or if their families receive Ontario Works or Ontario Disability Support Program assistance.• Children are eligible to apply if they come from a low-income household. This includes families with one child with an annual family net income of $22,401 or lower; two children with $24,096 or less; three children with $25,791; and it rises with each child. Visit the website for a full eligibility table.York GuardianBy Dominik Kurek You’ve heard it before, and you’ll hear it again: you have to take care of your teeth and see your dentist.But, if you don’t have dental coverage, an appointment to see the dentist can get pretty expensive.So, Ontario has made it easier for

by BOB SALSBERG, THE ASSOCIATED PRESS FILE - In this Dec. 4, 2009 file photo, dental hygienist Heather Heathcote takes a dental exam while studying to become a dental therapist at Normandale College in Edina, Minn. Several states are considering bills that would create a new midlevel position in dentistry called dental therapists or advanced dental hygiene practitioners. They can perform common procedures such as filling cavities or pulling teeth, though more complex procedures would still be left with dentists. (AP Photo/Dawn Villella, File)

BOSTON – Need a tooth pulled or a cavity filled? Forget the dentist. A number of states are allowing or considering letting “dental therapists,” professionals with a lower level of training, do the job.In dozens of countries and a handful of U.S. states, dental therapists also sometimes called advanced dental hygiene practitioners help fill gaps in access to oral care for low-income, elderly and disabled people, and in rural areas where few dentists practice, according to many public health advocates.In Massachusetts, a group that lobbies on behalf of dentists has for the first time signalled a willingness to embrace the concept, though its proposal is viewed as unnecessarily restrictive by sponsors of a competing bill in the

BRAMPTON, ON (Feb 6, 2017) - A Mississauga dentist had the chance to thank the paramedics and firefighters who saved his life, a year after his heart stopped beating in his dental officeOn Monday, Feb. 6, Dr. Jeffrey Kirshenbaum from Erindale Dental Centre had a special reunion with Peel Paramedics Justin Migchels, Ty Pilkey, Jennifer Ralph, and Petar Salinovic; and Mississauga Firefighter Tim Shuff.In December 2015, Dr. Kirshenbaum collapsed and went into sudden cardiac arrest just as he arrived at work. First responders were by his side within minutes. "Every time I see my grandchildren, I say 'I almost wasn't here'. It is because of what you did that I'm here today. I can't thank you enough," said Dr. Kirshenbaum. Thanks also went to the staff at Erindale Dental Centre, who were spurred into action when they found their colleague on the floor: a fellow dentist did mouth-to-mouth, other staff took turns doing chest compressions, while others called 911 and started using an AED (automatic external defibrillator). “Reunions like this one are made possible because of people like the staff at Erindale Dental Centre, whose quick thinking and willingness to act saved a life. By performing CPR and using an AED, they made our